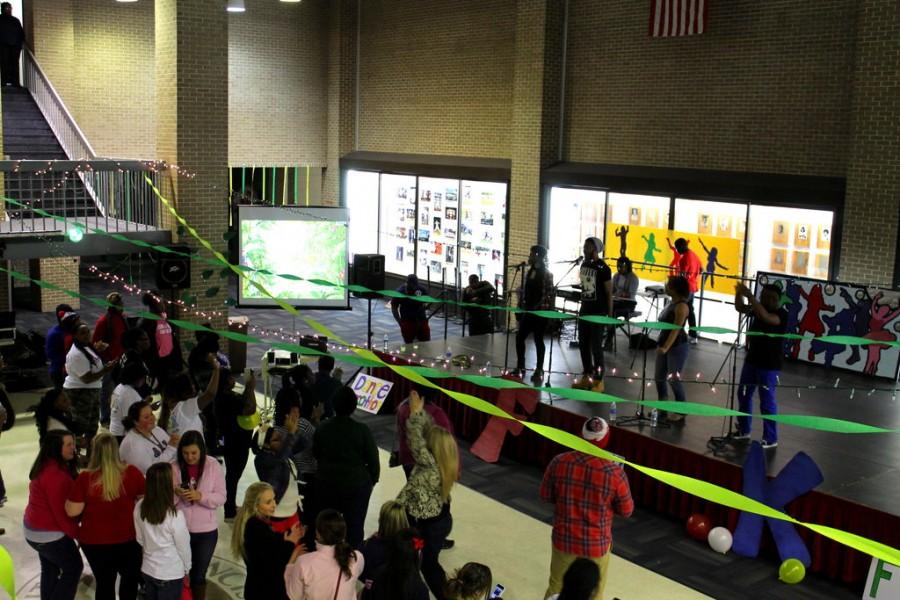 The Dance Marathon organization of Francis Marion University (FMU) and members of the community danced to fundraise for babies and children in need of medical care at the second annual Dance Marathon on Jan. 24 from 4 p.m. to midnight in the Smith University Center (UC).

One hundred percent of the money that Dance Marathon received will go to the Children’s Miracle Network of McLeod Children’s Hospital in Florence.

Jordan Tillar, senior general studies major and president of Dance Marathon, said the organization was seeking to raise $3,000 dollars through the fundraiser.

One way that the organization raised funds for the effort was through the $5 pre-registration fee and the $10 door fee which was paid by Dance Marathon participants.

The theme of the marathon was “Hakuna Matata,” a phrase from the 1994 Disney film “The Lion King” meaning “no worries.”

Kiara Gore, senior biology major and vice president of Dance Marathon, explained that the theme was chosen because it took the kids to a more carefree place.

“You have kids who have bad sicknesses, and we don’t want them to be troubled,” Gore said.  “We want them to know that there are no worries.  You can beat this; you can fight this.”

The slogan for the event was “We take a stand for those who can’t.”  According to Tillar, this meant that no chairs were to be provided for the marathon.

“We take a stand for those who can’t,” Tillar said.  “We’re trying to keep everyone from sitting, and the only way to keep somebody from sitting is to take away the chairs.”

During the evening, there were dancing and singing performances including selections by the FMU Music Industry Ensemble.  Games such as “Timon Says” and others inspired by comedian Nick Cannon’s “Wild N’ Out” television show were also played.

FMU President Fred Carter, PhD., shared the first dance of the evening with his wife and supported the marathon’s effort by donating $1, 500.

“It’s wonderful this evening,” Carter said.  “We have a couple of the children who came through their treatment process with us.  It certainly gives clarity to the purposes of the night when you watch the children be a part of the process.”

Carter said Dance Marathon was “a good thing for our students” because it gives them some appreciation for how important charitable and philanthropic efforts are.

“I couldn’t be more proud of our student body for coming together to support this type of effort,” Carter said.

He added that whatever part the university plays in the event, whether it is raising money or sponsoring support for the hospital, it is well worth every dime.

An FMU alumna, Rachel Buckley, who graduated in 2009 with a degree in psychology, is the mother of a child who was born prematurely.

“She [Buckley’s daughter] was born at 28 weeks, which is two and a half months early; she only weighed 3 pounds, 3 ounces when she was born,” Buckley said.

Buckley said her daughter had a deadly bacterial infection when she was born as well as Patent Ductus Arteriosus (PDA), which is a heart condition where the valve in the heart that normally closes at birth remains open.

However, Buckley said the treatment that the Children’s Miracle Network was able to provide for her daughter closed her heart valve appropriately, and the antibiotics cleared the infection.

“If it wasn’t for events like these, my daughter wouldn’t potentially be there because we wouldn’t [have had] the support, the funds, the equipment that they would have needed to save her life,” Buckley said.

Another parent, Ashley Green, was in attendance and is also the mother of a child who was born prematurely.

“She [Green’s daughter] was born at 25 weeks, so she was 15 ounces, an ounce less than a pound,” Green said.  “She was really small; she was really tiny.  I think she was the smallest child in the NIC-U [Neonatal Intensive Care Unit] ever.”

Green said she believes a dance marathon is a great way to raise money and is “something fun that college students and anyone would actually like to join and participate in.”

“I really can’t explain how much it means to me because without the Children’s Miracle Network, I honestly think she would have not made it,” Green said.  “With all the technology that they have and their funding…she was so small; she had a 50 percent chance of making it.”

Dance Marathon will announce whether it met or exceeded its $3,000 goal during the closing celebration ceremony scheduled for April.