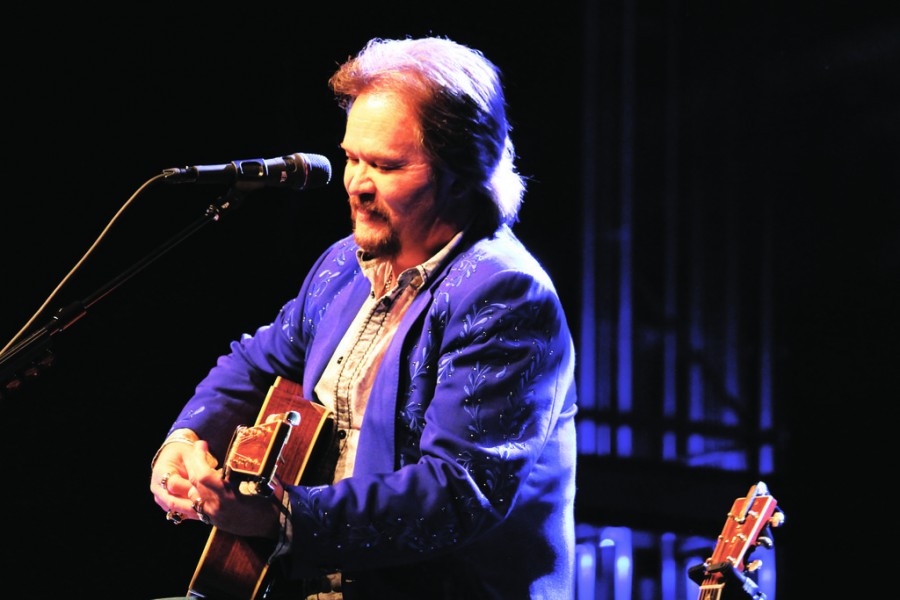 Tritt gave a performance that featured only him and his guitar and encouraged the audience to participate as much as possible during the night.

“Welcome to my living room,” Tritt said.  “Y’all just party all night, but please don’t spill nothing on the carpet. It’s not paid for yet.”

He began the show by sitting on a stool singing one of his first hit songs “That’s Alright Mama,” but by the end of the night, Tritt was up dancing in his cowboy boots and signature rhinestone-studded jacket.

Tritt opened with a series of his top recording songs that included “Where Corn Don’t Grow” and “I’m Gonna Be Somebody.”

As the song hints, Tritt did become somebody in the country music industry, beginning his career in the late 1980s.  During the time that he began to emerge as an artist, he strived to be different from the norm.

Tritt said he refused to wear a cowboy hat, which at that time was unheard of in country music, and played a more rock-influenced style of music than had ever been heard before in the genre.

While he stood out in the industry, Tritt explained that his unique style is what helped to propel him.

He had many singles, number one hits and albums that sold millions.  To date, he has sold more than 25 million copies of his singles.  He went on to win two Grammy awards and three Country Music Awards (CMAs).  Tritt also performed at the 1996 Olympics, CMAs, two Superbowls, the World Series and NCAA championships.

During his performance at the PAC, he played some of his older hits, new releases, covered song by other country artists and performed songs, including Johnny Cash’s “I Walk the Line,” by his musical influences.

“There’s not a day that goes by that I don’t think about my dad, Johnny Cash and Waylon Jennings,” Tritt said.

Tritt further entertained the crowd by doing an impersonation of veteran country singer Willie Nelson; he plugged his nose and sang in a high pitched, nasal voice.

In the middle of his acoustic show, Tritt took some time to play songs that he dedicated to the influences in his life and tell stories of how they helped shape him into the artist he is today.

Tritt talked about how Cash would write him stacks of letters reminding him to never forget his fans.  He said Cash would always tell him to remember that without the fans, “you are nothing.”

Tritt also discussed the impact that Jennings had on his musical style.  He said Jennings was an untraditional musician that stood out in the country music world and worked with Tritt on how to accept one’s differences and use them to help move one forward.

The audience sang along to each song, waved homemade signs expressing their fandom, clapped, stood up, danced and shouted from the first song to the last note played.

Tritt ended the show to a reluctant crowd.  After only a couple of minutes of attendants’ chanting and shouting from the packed theater, Tritt came back out with his guitar and played four more encore songs  before finally ending the show.

According to PAC staff, Tritt’s appearance was the center’s biggest selling and most popular event since its opening.  Tritt’s show sold out almost immediately and brought a significant amount of attention to the PAC.