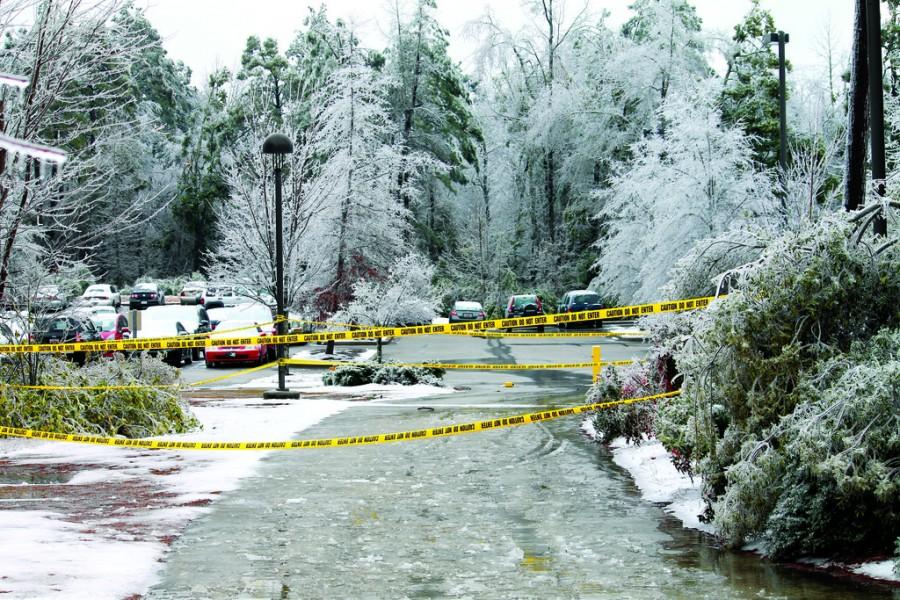 A “winter hurricane” caused Francis Marion University (FMU) to close and all university activities to be cancelled from 1 p.m. Tuesday, Feb. 11 until Friday, Feb. 14.

The campus’ closure was due to the 0.75 inches of ice that accumulated, bringing down trees and power lines and causing unfavorable driving conditions. The estimated snowfall total was between 2-3 inches.

According to Chief Richard J. Austin of the FMU Campus Police Department, campus police determines whether to close the campus or operate on a delay by monitoring State Emergency Preparedness information and working closely with Florence County Emergency Management.

The department also updates FMU President Fred Carter, PhD., and the senior staff as to what the National Weather Service is predicting from any severe weather.

“I’ve heard several people on the news refer to this ice storm as a winter hurricane primarily due to the amount of damage that was predicted and, unfortunately, which occurred,” Austin said.

Road conditions Wednesday night and Thursday were hazardous due to the accumulation of ice and sleet as well as the number of trees and downed branches and power lines.

“Around campus, we have had a number of trees come down as a result of ice accumulation and a great many limbs as well,” Austin said.  “Unfortunately, one large limb fell onto a student’s car in Parking Lot ‘G,’ causing a great deal of damage but no injuries.”

Austin said some press reports indicated more than 30,000 customers in Florence County were without power, and FMU was included in those outages.

As of Friday morning, power companies were reporting the outage number was around 15,000.

“Happily, the system did not drop as much ice and snow as was expected on our area, but the roads did remain treacherous on Wednesday [Jan. 29],” Austin said.  “By Wednesday afternoon, we did find some melting of snow and ice on the roadways, but concerns remained that areas covered by trees on areas that had thawed would re-freeze given the anticipated overnight low temperature.”

Austin explained that these circumstances led to the university erring on the side of caution and opting to close for two days and delay opening on the third.

During both weather events, FMU Grounds Maintenance treated the roads, sidewalks and staircases with sand and salt to minimize the storm’s impacts.

Keyla Shepard, freshman visual arts major, said she is “not much of a snow fan” but was glad to get some time off from school because of the snow.

“During the event, I spent my time hanging out with friends and catching up on school work,” Shepard said.  “I went sledding and built a mini snowman, which melted way before the day ended.”

However, Shepard said the ice storm left her “pretty frustrated and upset.”

“There was nowhere to go and nothing to do but wait until the power came back on,” Shepard said.

Dr. C. Allan Lockyer, professor of geography and coordinator of the geography program, said this winter has been colder than what this region is used to.

Lockyer said during the worst of the cold, the region has been about 10 to 15 degrees below average.

Lockyer explained that the warming in the polar region is putting more water and moist air into the oceans, and in the winter time, it is causing more droughts on the West Coast and more strong dips in the Jet Stream on the East Coast.

“From what the climatologists have been warning, this is what we can expect from global warming,” Lockyer said.  “Places like California that typically get winter rains and snow in the Sierra Nevada Mountains, aren’t getting much precipitation, and places that are relatively mild, like the Southeast, may be in for colder winters with more ice and snow.”