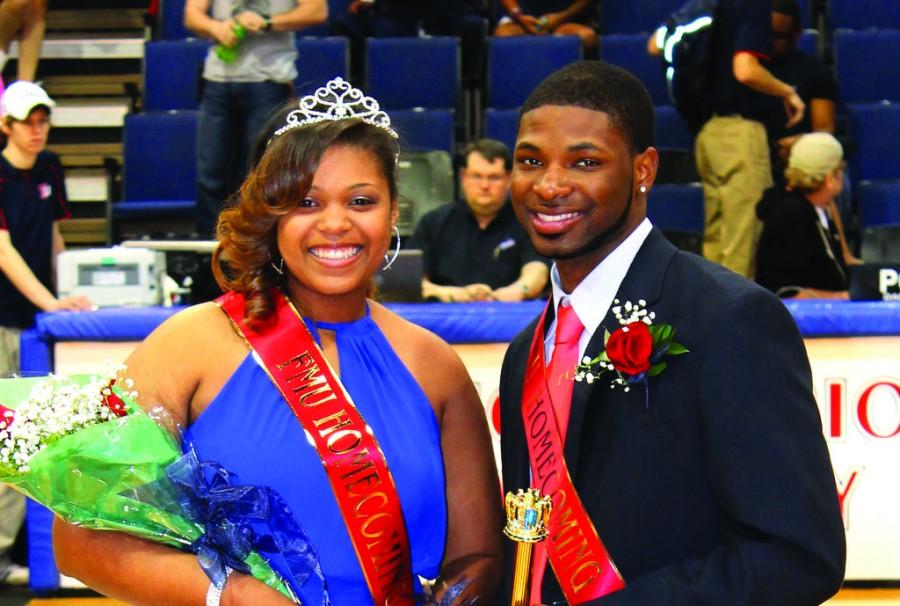 The gym was packed with standing room only to watch the homecoming court take center stage as Francis Marion University (FMU) students and alumni gathered together to celebrate the crowning of this year’s king and queen on Feb. 22.

The FMU homecoming court made its procession after the Patriots’ victory at the much-anticipated basketball game against GRU Augusta.

Young men and women from different majors, classifications, organizations and backgrounds ran for the chance to become king or queen.

As Marshall and Wilkins were crowned, the entire gym went up into a roar of excitement.

“The ladies in YGB [Young, Gifted and Blessed gospel choir] nominated me,” Marshall said.  “It’s a great honor that the student body selected me to be their homecoming queen.”

An emotional Marshall was surrounded by her friends, YGB members and her family as she was crowned.

Her grandmother was the first to run down the stairs and congratulate her on her achievements.

“I will make a good homecoming queen because I have school spirit and class,” Marshall said.  “I want to show FMU in a positive light and show off my Patriot pride.”

Patriot pride was the theme throughout the entire homecoming week.  Marshall and Wilkins also participated in various activities throughout the week to help show school spirit and to try and get other students involved.

Wilkins has been highly involved in campus life during his time at FMU.

“I am in SGA [Student Government Association], a diplomat, an orientation leader and now homecoming king,” Wilkins said.

Both winners emphasized their love for FMU and the amount of pride they take in the university.

“The hospitality here is what separates FMU from all the other schools,” Wilkins said.  “Everyone knows everyone, and people are cool with each other here.”

Among the other nominees, many different organizations were represented, including Zeta Tau Alpha sorority, YGB, SGA and FMU Intramural.

The FMU homecoming celebrations are always a large part of the annual homecoming program.  It provides a way for students, alumni, family, friends and members of the community to gather together to take pride in one of the communities pillar establishments.

FMU provided free admission to anyone in the community for the basketball game and the homecoming festivities.