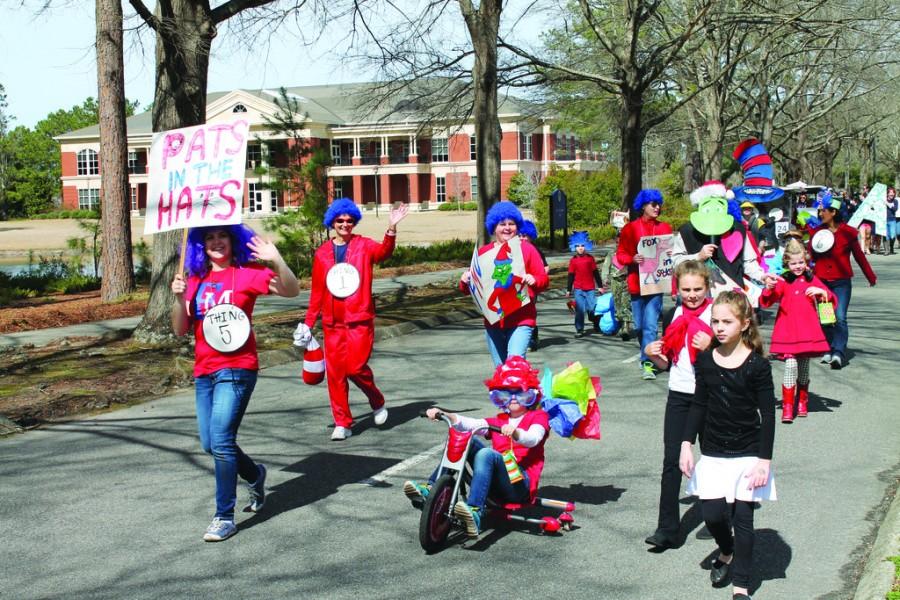 Homecoming Parade committee chairman and SGA senator Silas Griswold said that it was important to reach out to as many organizations as possible to ensure participants.

“SGA wanted to reach out and get all the student organizations excited for the homecoming parade this year,” Griswold said. “We wanted them to participate and be excited about it as well.”

Griswold said that this year’s theme for the parade was “Patriots Onward and Upward.” He explained that himself and homecoming advisor, Dean Latasha Brand, decided on the theme because of all of FMU’s recent achievements, changes and efforts to be a better school.

“We decided to decorate the cart with red, white and blue for the school,” Smith said. “We were really excited to see the creative side of the organizations that participated in the parade as well.”

According to Smith, ZTA won “Most Spirited,” one of the categories that were judged by members of the university.

The parade began behind the housing office, took a left onto Alumni Drive and ended at the Patriot Fest, an event that was hosted on the University Center (UC) lawn.

The Patriot Fest allowed for students and alumni to connect while eating hamburgers, hotdogs and other cookout style foods. Parade winners were also announced during this time.

Griswold said that the turnout for both events was “pretty good” and that they were both successful. Many students thought the same and some were even happy they were able to meet some new people, both students and alumni. Nkili Gause, junior Sociology major said she enjoyed meeting some of the alumni and sharing her experiences with them.

“It was interesting interacting with people who have already been in our shoes and can share stories of how campus has changed throughout the years,” Gause said.

The Homecoming Parade and Patriot Lunch Fest are annual events during FMU homecoming week. Present and future students can look forward to these events for Homecoming 2015.