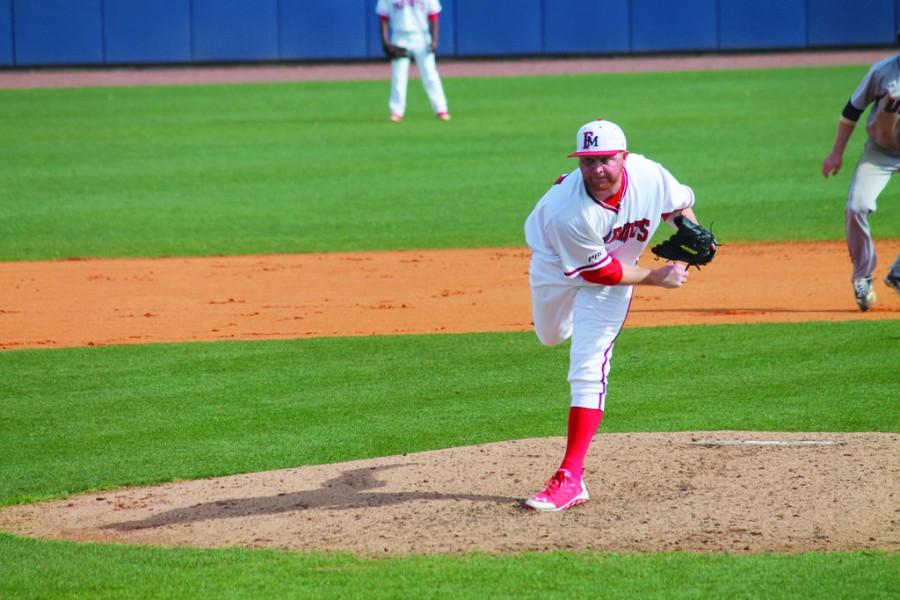 Jordan Santak, a 6’2 right-handed pitcher, looks to make an immediate impact on the mound for Francis Marion University (FMU) baseball in their 2014 season.

At Delcastle Technical High School, Santak’s first season was a notable one.

“[In my] freshman year, I spent one day practicing with the freshman team before moving up to JV,” Santak said.  “By the next week, I was placed on varsity.”

Playing both shortstop and pitcher, Santak was the first freshman in school history to win “Most Outstanding Varsity Player.”  In the years that followed, Santak earned first team All-Conference honors all four years of high school, including second team All-State honors at the shortstop position his junior year.

Upon graduating, Santak was heavily recruited by all the major universities in Delaware and other schools including the University of Maryland, Frostburg State University and Saint Petersburg Junior College in Florida.

Santak signed, along with three of his travel baseball teammates, with Frostburg State University out of Maryland.  In his freshman year, Santak tore the ulnar collateral ligament (UCL) in his right elbow which required Tommy John surgery, a procedure where the UCL in the elbow is replaced with a tendon from elsewhere in the body.  Santak was then medically redshirted for the remainder of his freshman and sophomore years.

“After spending two years at Frostburg and redshirting, I couldn’t see myself spending four more years there,” Santak said.  “After my injury, I wanted to go to [junior college] because it was unknown how my arm would react to the surgery.”

One of Santak’s roommates suggested he look into the program at Cecil Community College in North East, Maryland.

“That summer after getting my release from Frostburg, I met with the head coach from Cecil, and he said he would be glad to have me play for him,” Santak said.

Santak knows that his decision to attend a junior college and play for Cecil was a beneficial one.

“It gave me the opportunity to work back from my injury and to also gain back confidence in my arm and in myself to perform at a high level once again,” Santak said.

Once he recovered from his injury, Santak was named a starting pitcher again.  In his first year at Cecil, Santak was voted second team in both All-Conference and All-Region, and his team finished second in the conference tournament.

In his second year, Santak and his team won the conference championship and ended their season just one win away from advancing to the junior college world series.  Santak earned second team All-Conference and All-Region honors for the second year in a row while also adding the Gold Glove award for pitchers in their conference.  Santak finished his sophomore season with an earned run average (ERA) of 2.50 and was first overall in both strikeouts (80) and strikeouts per game (12.49).

After two years at Cecil, Santak was once again heavily recruited, but FMU seemed to have the most appeal.

“I chose FMU because I always wanted to get out of the cold weather and come play baseball in the south with a good program with a history of winning,” Santak said.  “Having a brand new stadium and good baseball facilities also helped.”

So far this season, Santak has an ERA of 4.70 with a record of 3-2.  Santak’s goal for the season is to give his team the best chance to win every time he’s on the mound.

“Of course I have goals to win the most games and to have the lowest ERA, but at the end of the day, all that really matters is if the team wins or not,” Santak said.

Art Inabinet, head coach of FMU’s baseball team, describes Santak as a “competitor,” and knew he would have a positive impact on the program.

“He is a strike thrower and challenges hitters,” Inabinet said.  “Hopefully, he will be one of our top pitchers this season.”

Santak, a junior majoring in general business, hopes to further his baseball career after graduating.

“I’ve worked my whole life to be a baseball player,” Santak said.  “Although there [have] been some setbacks, my goals and aspirations never changed. I was very close last year to taking that next step, so hopefully I can turn dreams into reality here at FMU.”