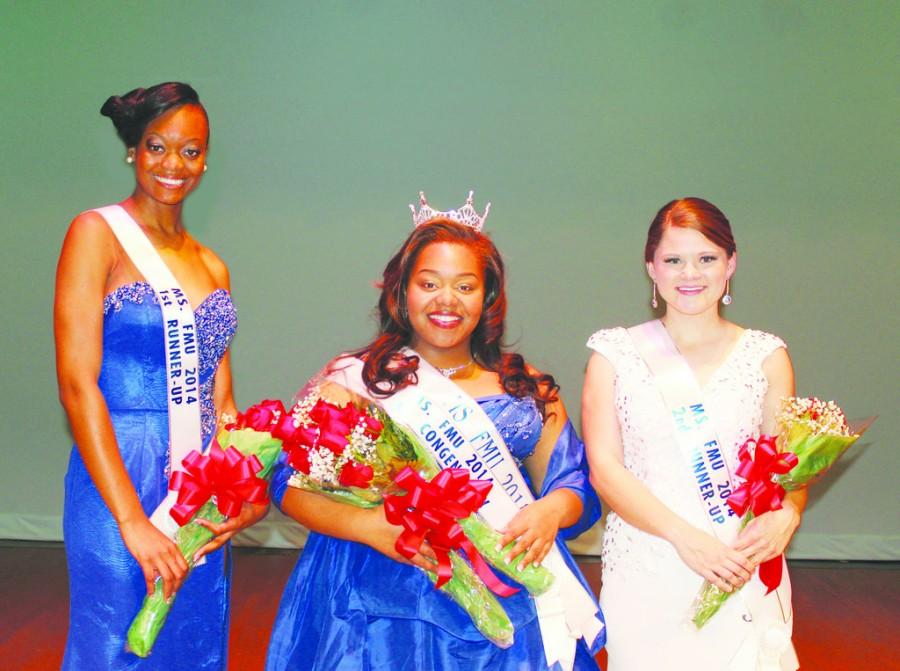 Breanna Robertson was crowned Ms. Francis Marion University (FMU) in front of a crowd of more a hundred students on March 13.

Roberston, sophomore pre-nursing major, added Ms. FMU to long list of achievements.  She took center stage as the overall winner and as Miss Congeniality.  After being crowned, she expressed her love of FMU and her excitement to represent the campus for the next year.

Robertson stays active in campus life by being involved in both academic and special interest organizations.  She is a fundamental member of multiple organizations including president of NAACP, Student Government Association (SGA) member, vice president of the Honor Student Association (HSA), an FMU Diplomat, secretary of the S.C. Student Legislature and a resident assistant.

All of the contestants are highly involved in campus life.

Khira McKenney, junior early childhood education major, was named first runner-up.  McKenney serves in several positions with the campus community.  She is a Diplomat, a University Programming Board (UPB) member and participates in Young, Gifted and Blessed gospel choir and The Riot.

James, like the other contestants, is invested in the university.  She is the president of Alpha Delta Pi sorority and has extensive leadership experience.

One of her goals as second runner-up, James said, is to promote school spirit and encourage others to get involved on campus.

All three women will use their positions in the Ms. FMU Pageant and their respected organizations to help improve the quality of campus life.

Robertson said she will use her crown to help spread her message of school spirit and academic success by being present at upcoming open houses, school events and functions, freshman orientations and local events in the community.

The Ms. FMU pageant is a 43-year-old tradition which began in 1971. To be involved in the next pageant, interested students can apply next spring at the Office of Student Affairs in the Smith University Center (UC) or contact Cheri Richardson, event coordinator and associate dean of students, at 661-1229.