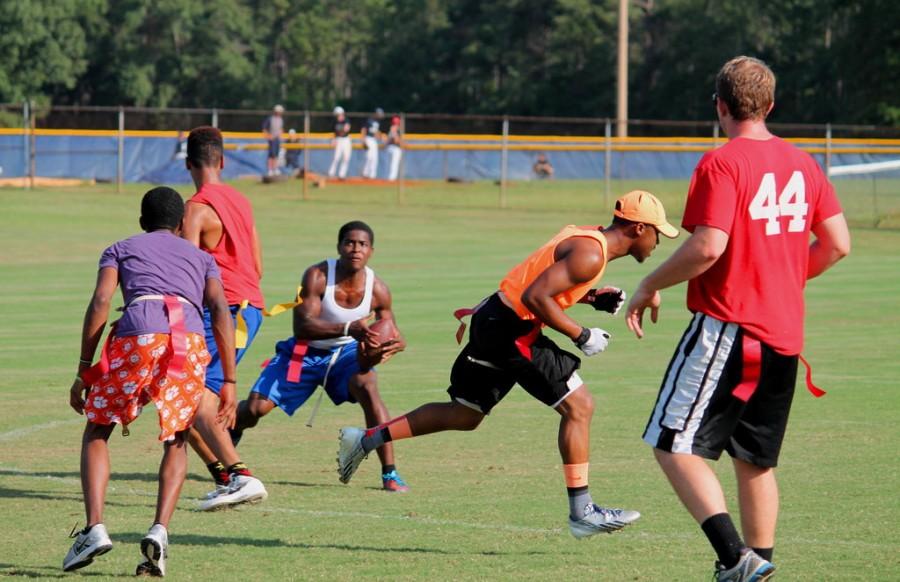 After a year off, intramural flag-football has returned and is looking better than ever. Unlike most intramural sports, the teams aren’t predetermined by the players; instead there was combine and an NFL style draft, with student-managers for each team.

The combine allowed athletes to show their skill in the 40-yard dash, long distance toss and several other drills, while the managers took note from the sidelines for their draft picks.

Director of campus recreational sports Derrick Young has been working diligently on the project for months and sees it as an outlet for students that may not have had the chance to play football at a collegiate level.

“I’m excited, all the students involved are excited, especially some the freshman,” Young said. “We’ve been talking about it since freshman orientation…I’ve had over 50 students come to me asking when can we start.”

Every detail of the sport has been planned and coordinated by Young to simulate an NFL-style experience. The managers of each team had to go through an application and interviewing process to determine whether or not they had the qualities that are desirable in a leader, Young explained.

Managers will be able to set their roster and trade players amongst each other, much like managers in the NFL. There will be student referees for every game, as well as back-ups in case of a no show.

Francis Marion University is the only university with a draft for intramural football, Young said. It’s unique idea that has sparked interest and Young believes that excitement carry-on.

“We made our own flag-football crest, and even made a separate one just for draft day,” Young said. “We’ll have Monday night football theme music playing…we’re all really excited about it.”

The first game kicks off on Tuesday, Sept. 23 and a more detailed schedule will be released soon.

Students that still wish to play but may have missed the combine and draft may still be eligible. For more information about intramural flag football, contact Derrick Young at dyoung@fmarion.edu, or catch him in the University Commons.