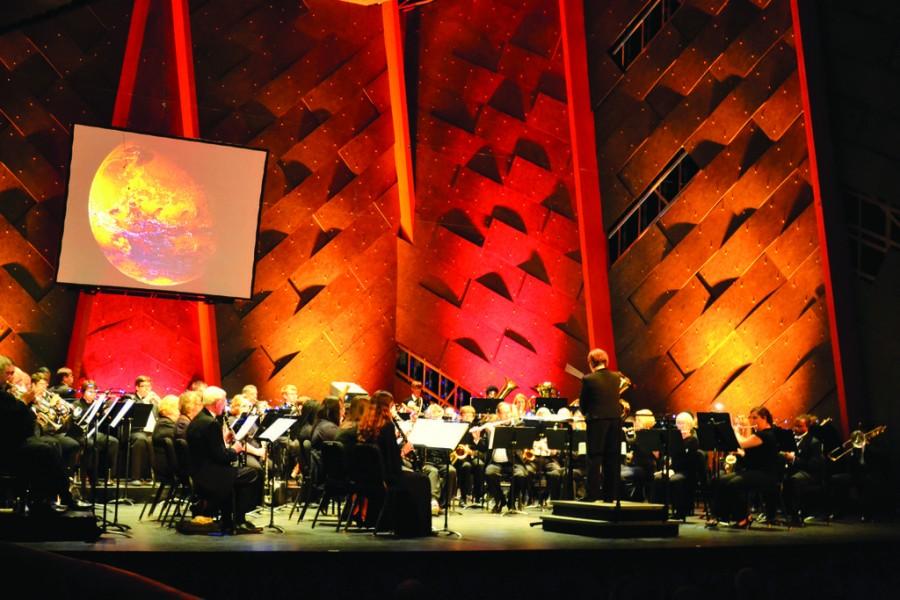 Francis Marion University’s Performing Arts Center took both Francis Marion students and the city of Florence on a musical journey through the Solar System.

The PAC presented a one of a kind concert Thursday night. The FMU Concert Band is a mixture of FMU students and local musicians from the surrounding community. Each Honors Astronomy class student provided an introduction and a presentation that contained pictures, both researched and taken by the students themselves, along with interesting facts of the planets of their choice.

This concert was made possible by FMU’s very own faculty members Kelly Jokisch and Dr. Ginger Bryngelson. They were the collaborators at the heart of this beautiful creation. Jokisch is the director who first proposed the idea of the collaboration. Bryngelson is the instructor of the Honors Special Topics 280 course: Our Place in Space that provided the visuals for the concert.

Our Place in Space explores the diversity of the universe and how scientists have come to understand it. With the use of robotic telescopes, the class explores the surrounding solar system, planets and stars beyond the galaxy to the edge of the visible universe.

“We would like to inspire the audience to be interested in what’s out there in our Solar System,” said Bryngelson. “These are visuals that the students put together to couple with the music … and facts that are most interesting and inspiring about the projects.” The six student’s creations accompanied six of the seven suites that the FMU Concert Band performed.

Jokisch wanted to teach the public, especially students, that “music can be used to express feelings, subjects and different emotions.” Her love of music, especially Holst, was one of the many reasons the partnership with Bryngelson was created. Planning the concert since May with Bryngelson, this was a dream come true for Jokisch. “Music can be interdisciplinary,” Jokisch said. “It is possible for music to be cross-curricular.”

Musical Journey through the Solar System provided an example of interdisciplinary projects. Music and science can form a harmonious vision.