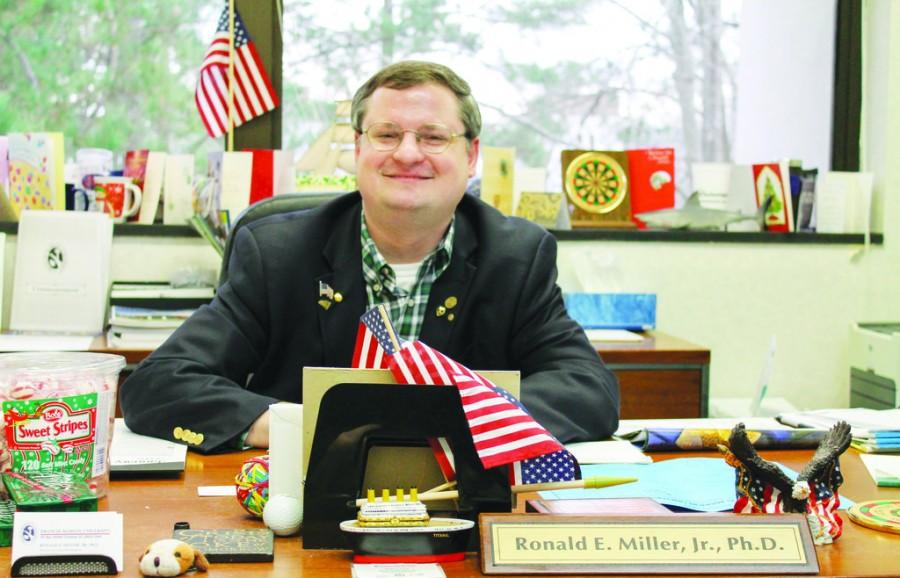 Director of Career Development, Dr. Ronald Miller is using every outlet possible to motivate the students of Francis Marion University (FMU) and provide them with resources to succeed in all of their future endeavors.

Miller began his teaching career at Presbyterian College where he also received his Bachelor of Arts degrees in English and religion.  One of his students invited him to a father/son fraternity party at FMU, and Miller agreed to attend.  It was at the party that he met the student’s father who worked at FMU.  Miller was told about an open position teaching English at FMU, and he jumped on the opportunity.

He has claimed FMU as his home since the first day he stepped foot on campus.  “Francis Marion is unlike any other school,” Miller said.  “You truly get the best of both worlds here.  You get the resources of a public state university, but you also get the one-on-one experience in the classroom that comes from being a private liberal arts college.  I love working at FMU because you get to see when you make a difference in the lives of other people.  More importantly, you get to see how others make a difference in your life.”

While teaching English at FMU, Miller became increasingly interested in helping students succeed outside the classroom just as much as inside.  He began working on a volunteer basis with the Office of Student Affairs.  It was not long until he was working one-on-one with the different university organizations, even signing up to be a faculty advisor.

After getting involved with the organizations on campus, Miller was offered the position of Director of Career Development.  The position allows him to work on an individual basis with students to prepare them for their future careers.

Career Development services are open to all current FMU students as well as all FMU alumni. Services include resume and cover letter writing, filling out job applications, mapping out steps in achieving a certain goal and building skill sets.

“Going to the Career Development office is like going to the doctor,” Miller said.  “You can wait until you are really sick to go to the E.R., and they will do their best to fix what is wrong.  Or, you can go to your doctor regularly for preventative care so that you can avoid having to go to the E.R. in the first place.  That’s how Career Development works.  You need to come in regularly during your course of studies at FMU so that we can build soft skills for jobs later.  Our goal is to develop students academically, professionally and personally.”

Miller utilizes social media to announce any job openings at FMU or in the community.  He also regularly posts information on how to expand a resume and build skills.  Not only does Miller currently use social media to help update students, but he was also the first college professor to obtain a Facebook before Facebook became open to schools outside of the Ivy Leagues.

While his first love is providing guidance to each student, Miller also has other interests that reflect his humble personality.  He regularly volunteers in the community by giving back to local organizations.  He is actively involved in the Florence Rotary Club, the Florence Literacy Council and Lighthouse Ministries.

His love for giving back stems from his deeply rooted faith.  “My greatest accomplishments have not come from a job or a position,” Miller said.  “But from the person I have become and am becoming in Christ.”

The only thing that Miller loves as much as his FMU Patriots is University of South Carolina (USC) football.  Having attended USC for his masters and Ph.D. in English, Miller regularly attends football games proudly decked out in garnet and black.

Miller contributes the majority of his success to his colleagues at FMU.  “I could not do anything without the help of Janice Smith and Teresa Ramey,” Miller said.  “Those two women love what they do, and they love the students just as much as I do.”

Miller’s humility and faithfulness have propelled him to new heights at FMU.  He has excelled at every task given to him, and he does it all with a smile on his face.