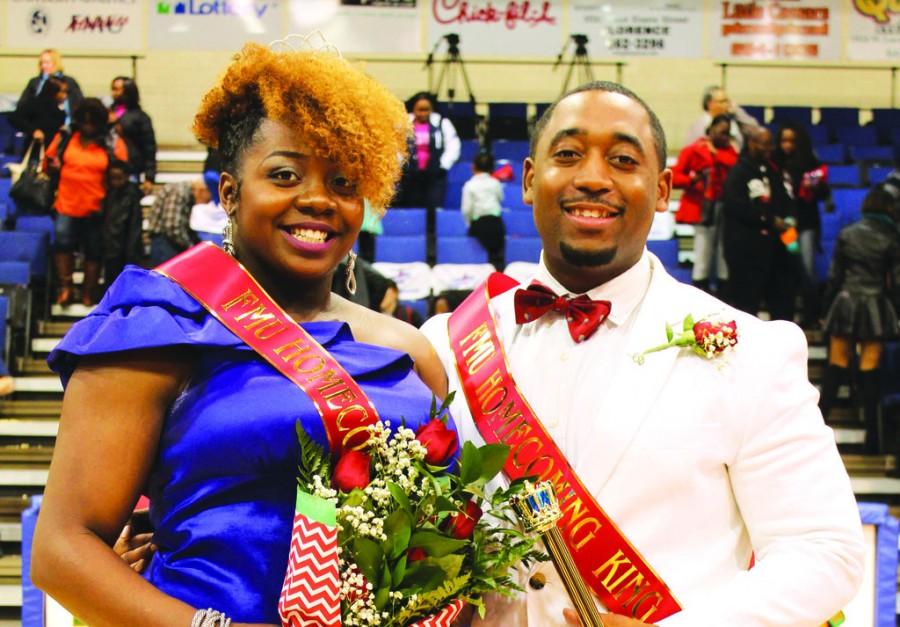 Junior Samuel Smoot from Irmo, S.C., and senior Domonique Dotson from Columbia, S.C., were named the 2015 FMU homecoming king and queen on Feb. 21. The homecoming king and queen candidates were introduced during halftime of the men’s basketball game against USC Aiken. The coronation ceremony took place after the game. Smoot and Dotson smiled, laughed and posed for pictures on the court as they celebrated with family and friends. “It feels great that the student body elected me,” Dotson said. Dotson was nominated to run for homecoming queen by the Young, Gifted and Blessed Gospel Choir (YGB). She serves as the treasurer for YGB, is a resident assistant, mentors freshmen and enjoys styling hair for friends. “I’m very known around campus,” Dotson said. “As homecoming queen, I want to continue making people smile.”

Dotson said that she has participated in pageants and won Miss Lower Richland High School when she ran for the title as a freshman. “None of this would have been possible without my family, friends, the support of YGB and God,” Dotson said. Smoot was nominated to run for homecoming king by Omega Psi Phi Fraternity. “I was just kind of forced into [running for homecoming king],” Smoot said. “My fraternity encouraged it.”

Reigning homecoming king and queen Adrian Wilkins and Melissa Marshall were at the coronation ceremony to crown Smoot and Dotson. Wilkins is a graduate of FMU with a degree in English, and Marshall is a junior pursuing a degree in mass communication. Marshall said that campaigning for the 2014 homecoming queen title is an experience that helped her mature and taught her how to better communicate with a variety of people and develop her networking skills. “Being homecoming queen taught me to be humble,” Marshall said. “The actual process was what made me feel like a winner. For so many people to come together in my favor, it left me in awe.” Approximately 300 FMU students voted in the 2015 Homecoming King and Queen elections.

Voting took place from 10 a.m. to 3 p.m. on Feb. 17 and 18 in the Smith University Center. Homecoming candidates were also introduced at the homecoming dance on Feb. 19. There were five homecoming king candidates: Jeffrey T. Grice, Brandon McDowell, Daryl Hammonds, Samuel Smoot and Michael Youssef, and there were six homecoming queen candidates: Keondia Curnell, Destiny Davenport, Domonique Doston, Laken Long, Jackqueline Lowery and Keyosha Weston. Dean Cheri Richardson said that students have to meet certain qualifications in order to run for homecoming king or queen. Students must be sponsored by a registered student organization, be enrolled in 12 or more hours at FMU, have a minimum of a 2.0 cumulative GPA and be in good academic and disciplinary standing with the university.