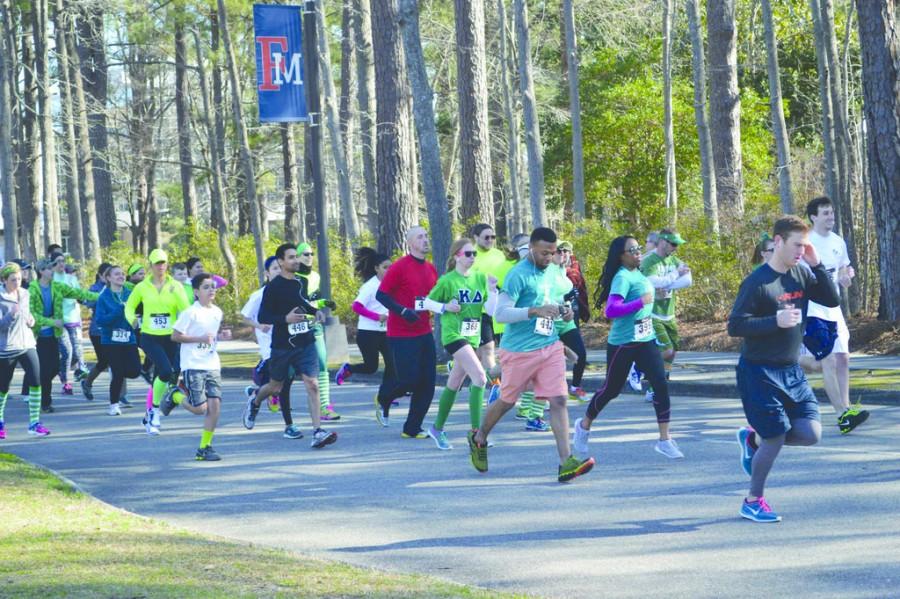 The shamrock fundraising events were to support KD’s national philanthropy: Prevent Child Abuse America. This year’s event, Shamrock n’ Run, was to raise money for Durant Children’s Center. The center is known as an advocacy center that provides medical attention and other services for children who have been physically, emotionally and sexually abused. The women of KD have been contributing money to Durant Children Center for the past 17 years.

The sorority was not the only key player in raising money. The other key player was the community. KD reached out to the public by combining their philanthropic efforts with a popular hobby: running.

“A 5K [run] seemed like a fresh, new idea,” Erin Shackelford, junior Spanish major and KD alumna, said. “It seemed to really be a hit with FMU students and people in the community.”

“This year we wanted to be able to reach people from all over the community of the Pee Dee and beyond to raise money and awareness for Prevent Child Abuse America,” Francis Robinson, senior liberal arts major, said. “People love to run, especially for a cause, so we decided as a chapter that the best way to have a successful event was to provide an event that people would enjoy.”

To many members of KD, the cause behind the event is something they hold dear to their hearts.

“The Shamrock ‘n’ Run, to me, was more than just a fundraiser,” Robinson said. “It’s truly a blessing when you know that your chapter is doing all they can to support a national cause. It was more than just a race; it is helping children in need when their hope is lost, locally and at the national level. Going to Durant Children’s Center and presenting them with the money that we collectively raised will honestly [be] the best thing ever, and the look on the employees’ faces will make it even better.”

KD was founded Oct. 23, 1897 in Farmville, VA. Four women from Longwood University founded the sorority. Their goal was to create something with more meaning than a club. The four founding women of KD created an organization that they hoped would grow and last for generations. Just over 100 years later, the organization has nearly 230,000 members, more than 200 chartered chapters and over 500 chartered alumnae associations nationwide.

KD upholds their objective of creating and preserving good fellowship, friendships and sisterhood among its members. Education and literature are very important to KDs, along with social interests and promoting charitable and philanthropic activities.

“The purpose of Kappa Delta sorority is to promote true friendship among the college girls of our country,” Robinson said. “By inculcating into their hearts and lives those principles of truth, honor [and] duty, without which there can be no true friendship.”

Like several other organizations, KD also helps with self-esteem.

“KD focuses on instilling confidence in girls and women everywhere,” Shackelford said. “We’re celebrating ourselves for everything that we are, being beautiful, radiant and confident”.