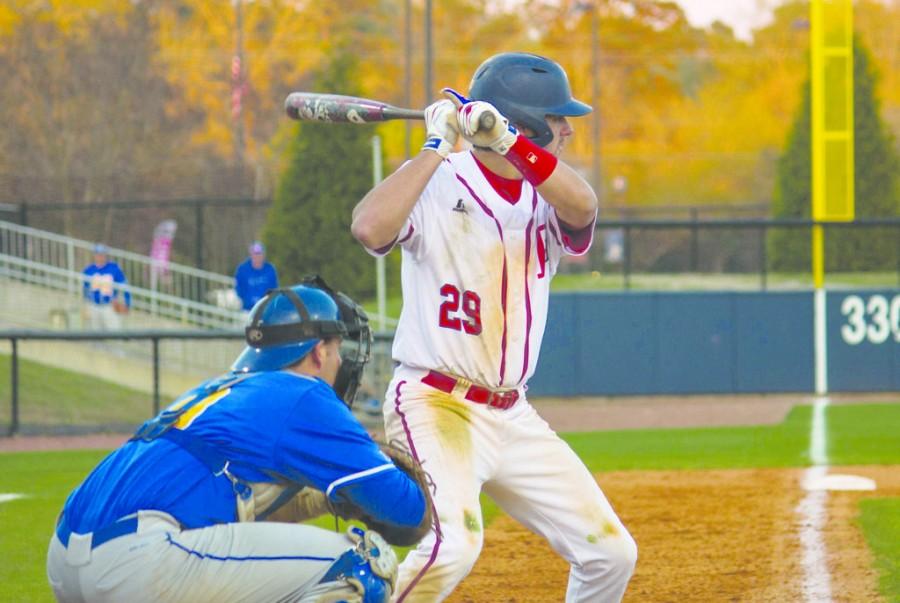 After a close 7-6 loss on Saturday, March 28, the FMU Patriot baseball team rallied back and dominated the second game of the double header against the Lander University Bearcats with an 11-5 victory in front of a crowded stadium.

With over 600 people in attendance to support their Patriots, team morale was at an all time high.  The longstanding rivalry between the Patriots and the Bearcats kept everyone on the edge of their seat waiting for the next pitch.

During the 3 p.m. match, the Patriots dug out of an early hole with the bases loaded to prevent the Bearcats from scoring and responded with senior first baseman Connor Wessel scoring the first run to put the Patriots up 1-0 after the first inning.

Solid swings in the fourth inning led the Patriots to a home run by senior catcher Matt Rubino.  The home run was reinforced by the Patriots capitalizing on a Lander error at second base to give FMU a 5-1 lead at the end of the fifth inning.

The top of the eighth was marked by a pitcher change from junior Matt Kelley to junior Ty Simpson.  A missed catch on a line drive to left field allowed the Bearcats to tie the game at 5-5.  Patriots quickly respond by junior outfielder Casey Clauss hitting a runner batted in to center field to put the Patriots in the lead.

After an intense game of back-and-forth between the two teams, Lander dominated in the ninth inning scoring two home runs one right after another to win the game 7-6.

Although the Patriots lost the first game, they kept their spirits up and came back in the second game strong and determined to taste victory.  The Patriots put in junior Daniel Barfield as the starting pitcher and he remained in the game for seven innings before being replaced with junior Jeremiah Freeman.

Lander put up a run early in the first inning, but FMU took control of the game shutting out Lander in the second, third and fourth innings with a 7-1 lead.  The Patriots continued to pull away with the victory and finished strong with an 11-5 win.