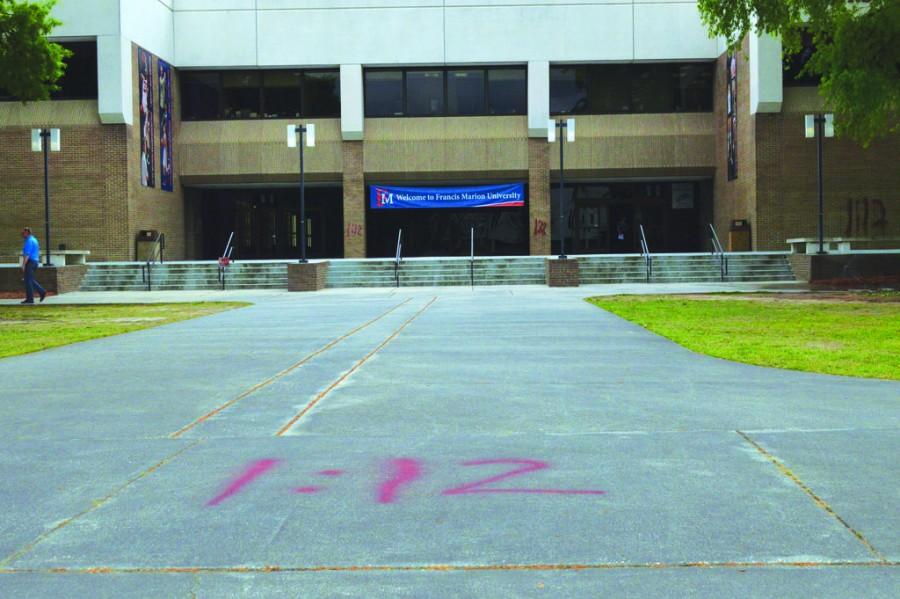 Four students were arrested Tuesday, April 14 at FMU after spray-painting “1:12” in more than 20 locations on campus the day before.

The symbol “1:12” was painted in red on more than 20 locations on campus. The places tagged include the Smith University Center, McNair Science Building, Rogers Library, the Octagon near the Housing Office, the statue of Francis Marion and sidewalks on the south side of campus.

“The observation from [South Carolina State Law Enforcement Division (SLED)] at this point is that they believe it to be nothing other than a simple act of vandalism,” Carter said. “FBI and SLED will be on campus this afternoon working with our own campus police.”

Shortly after saying this, an email from Teresa Ramey, vice president for student affairs and dean of students, was sent out to students and faculty informing them of the university’s cooperation with SLED.

“I’m a bit paranoid,” junior Jennen Wells said. “Hopefully nothing bad will happen; I just hope it’s a prank and nothing more.”

The email from Ramey did calm some fears though.

Viewers of the graffiti thought that the numbers could be representative of a Bible verse or a time. Onlookers waited on the lawn in front of the UC at 1:12 p.m. for something to happen, but the crowd dispersed around 1:15 p.m. when they realized that nothing had happened.

Another email was sent to students around 3:30 p.m. informing them that SLED and FMU’s campus police determined that the vandalism was a fraternity prank. They announced that “1:12” represented the first and the 12th letters of the Greek alphabet, Alpha and Mu, which were the letters representing the pledge class.

However, the incident left some students feeling uneasy about the safety on campus. A group of girls hosting a bake sale in the breezeway between Founders Hall and Cauthen Educational Media Center said that they were still uncomfortable. They said that the Village Apartments don’t have cameras, and anybody could walk up to their front door, whereas the Villa Apartments have better security. They felt uneasy leaving their apartments at night because of the potential for something bad to happen. This event brought to the minds of students he reality of danger and crime that could lurk in their backyards.