Management class uses sales skills for a cause 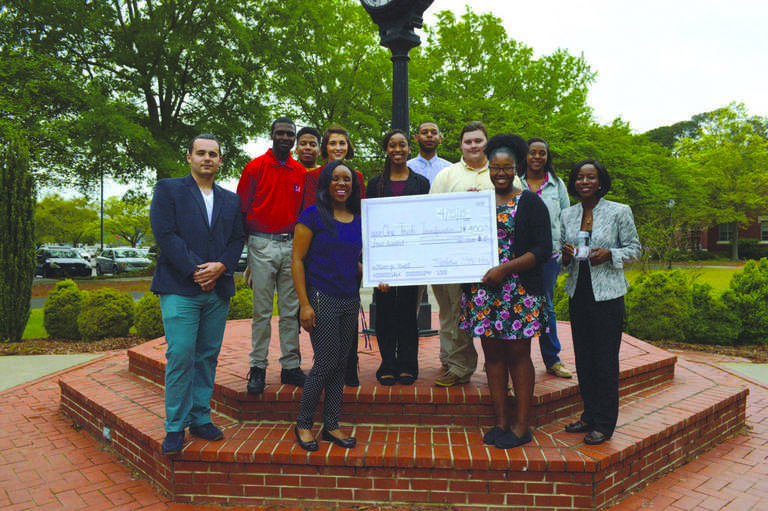 A class at FMU and their professor raised money and awareness during the spring semester for One Touch Transformation, a non-profit organization in Florence, SC.

The students of the Personal Selling and Sales Management class and Dr. Nwamaka Anaza designed colored Mason jar glasses to sell in order to practice their sales methods and integrate their learning with benefiting the community.  The profits from the cup sales go to the One Touch Transformation organization that helps raise awareness about sexual assault.

“[One Touch Transformation’s] mission is to educate, encourage and empower survivors as well as victims,” said Arthenius Jackson, administrative assistant for the school of business and founder of the organization. “It’s a bridge to help others get to the other side. Although [One Touch Transformation] doesn’t have counseling services, our job is to direct them to the local resources that are available.”

The students had a monthly quota of selling six cups per month. Their goal was to raise $400.  According to. Anaza, many students sold more than the monthly quota. The cups come in different colors and sport the phrase, “My past does not define me. My past prepared me.”

“Raising money for the organization was an opportunity for my students and I to bring awareness to an alarming issue that affects the lives of many Americans,” Anaza said. “Sexual violence is an endemic problem that leaves lasting mental, emotional and physical consequences on its victims.”

The students selling the cups were able to practice what they learned in class while helping the organization.  Keanna Jones, a student from the Personal Selling class, was able to use methods she learned in class to sell cups.

“This project did leave a big impact on me personally because it got me to realize that everyone can do something to help a bigger cause,” Jones said. “It also impacted me by helping me feel more confident in my abilities to sell anything. I am very thankful that my Personal Selling class, taught by Anaza, helped me grow as a salesperson through this experience.”

According to Jones, a few of the students sought to help out the organization beyond the class project.

“They took it upon themselves to care about this organization,” Jones said. “They wanted to help out as much as they could which is extremely admirable.”

On Wednesday, April 15, the students and Anaza presented Jackson with the money the class raised over the course of the semester.

“For the month of April, which is nationally known as Sexual Assault Awareness Month, One Touch Transformation hosts a weekend of awareness and empowerment,” Jackson said.

The money went towards the organization’s weekend event that took place April 17 and 18at Florence Chapter Ministries.

“There [was] a candlelight vigil ceremony in honor of all victims and survivors of sexual abuse,” Jackson said.

The next morning, the organization had “Walk a Mile in Their Shoes.”

. Anaza has been an active advocate for the organization since its founding in January 2014.  Last year the Personal Selling and Sales Marketing class sold wristbands to raise money for One Touch Transformation’s Sexual Assault Awareness Month event.