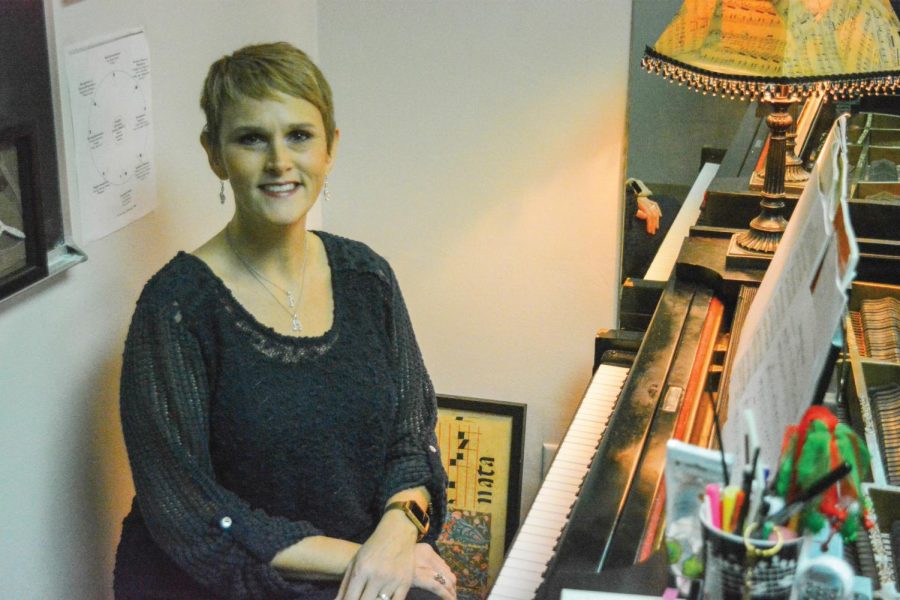 Mary Francis Coleman found her love for music at a young age. As the newest addition to the music department, she wants to share her passion with students.

For Mary Frances Coleman, director of voice and choral activities, a life devoted to music and helping others express themselves was a way to pursue a passion that has preoccupied her from an early age.

“My mom said I used to lay in my crib and sing to myself when I was a baby,” Coleman said. “I’ve been singing since before I could talk. There was a youth choir at my church, but you had to be of a certain age to get in and I was only 4, so I begged my choir director to start a mini youth choir. And so I sang my first solo when I was 4. Singing has always been what I wanted to do; there was never a question.”

Starting her career in music after high school, Coleman toured regionally on the East Coast with different bands for seven years, and at the end of that time found that she wanted to attend college. This allowed her to fulfill her personal goals and explore new areas of music.

“I started undergrad, at that point, for music when I was 24,” Coleman said. “I’d never sung a note of classical music in my life, and my teachers had no clue what to do with me because I was this Janis Joplin type singer who’d just come off the road singing rock music. So everything for me was more of a challenge. When a teacher would say, ‘I don’t know if this is for you,’ I would take that as ‘Are you challenging me?’ because I’ll take that challenge.”

Coleman earned a bachelor’s in vocal performance from Virginia Commonwealth University and a bachelor’s in music education from Longwood University. She then taught middle and high school chorus for two and a half years after graduating. Since she liked teaching choir and wanted to teach private voice lessons, she earned her master’s in vocal performance from Shenandoah Conservatory. Afterward, she discovered that she wanted to further her education.

“Once I finished my master’s, I just wanted more,” Coleman said. “And nobody in my family had ever gone to college. By the time I finished grad school, it was partly because I wanted to learn everything I possibly could about my craft, so I wanted to get my doctorate as well, but I also felt like I needed to for my family. I needed to learn everything I could about my craft; it was like a hunger.”

After earning her Ph.D. from Shenandoah Conservatory, she served as an adjunct professor at several universities in Virginia and ran a private voice studio for seven years. During that time, she received an email advertising an opening at FMU.

“I saw Francis Marion was hiring and they were looking for someone in their music industry program who could direct a choir and teach voice, not just classical but also contemporary,” Coleman said. “It was like the job was made for me.”

At FMU, Coleman works with two vocal ensembles, 19 voice students and second level theory students. She also performs with the Florence Symphony Orchestra and a wedding band that tours the Carolinas and Georgia.

Being an advocate for the arts and having heard her students’ talk about their experiences in the music industry program, Coleman said she recognizes the importance of creative outlets during college.

“I feel like that’s my main goal, to get the word across campus that we have an active music program and that it’s not just inclusive to music students,” Coleman said. “Anyone can sign up for choir, or string ensemble, or concert band, or jazz ensemble or the music industry ensemble. There’s lots of performing opportunities for students, and in my opinion, it is imperative that students have an outlet, whether it be music, theater or art – something artistic or even athletic. You cannot 100 percent put your head in the books or you will implode. Students should take advantage of the opportunities we have to offer them.”