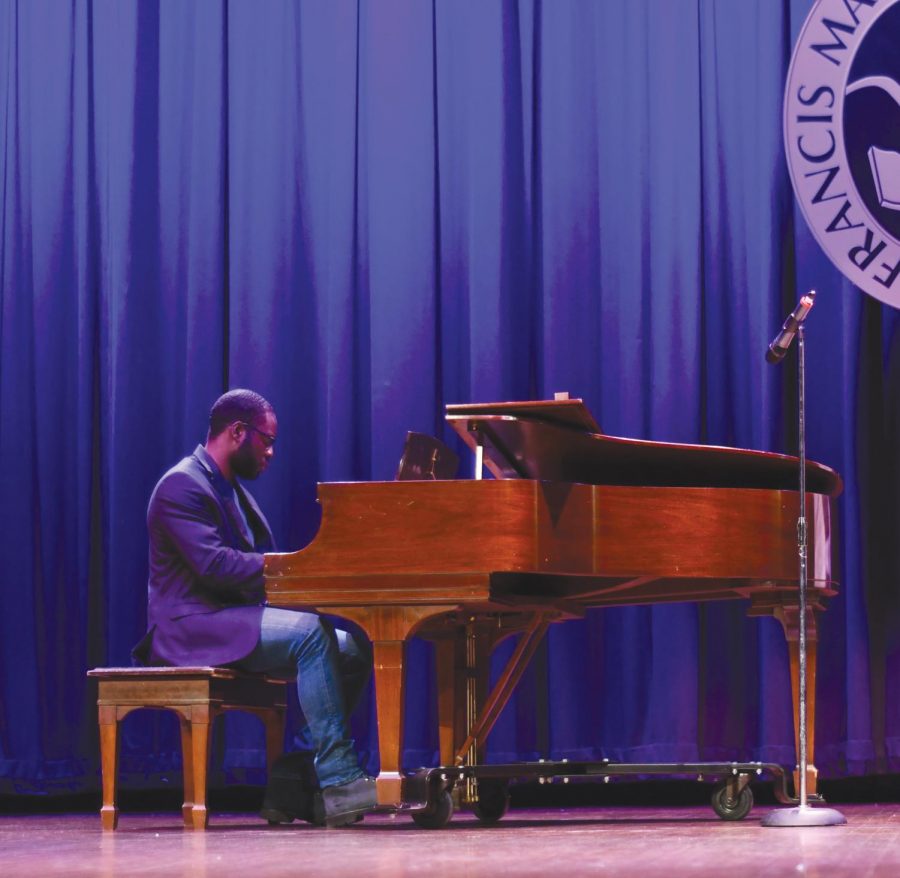 Donzell Bailey received his spot in FMU's got talent when event directors heard him playing the piano.

Donzell Bailey, a senior at FMU and self-taught pianist, continues to prepare for his next engaging performance after he gained attention on campus with his first two performances in the FMU’s Got Talent program.

“I realized that I couldn’t read notes so I started to listen,” Bailey said. “I remember we were at church and someone asked me if I wanted to play. Then I just started to pick up by ear.”

Bailey, a Charleston, South Carolina, native began playing piano at the age of 7. Hours would pass as he sat at the keyboard, having trouble comprehending the digital notes on the display, so he found another way to master his new interest. Since then Bailey knew that he had a passion for playing the keyboard.

Bailey described his audition for the talent program as coincidental and sudden. He was playing accompaniment for another student’s audition, and after they finished he began to play around on the piano. The event’s directors heard him and asked him to be a part of the program.

David J. Wolfe, a judge from the program’s panel, described Bailey as having a “funky-fresh” style and raved about his capability to engage the audience.

“Once he starts playing piano, you see how talented he is and how passionate he is about music,” Wolfe said. “I look forward to seeing what he has in store for the future.”

The auditorium remained full during Bailey’s performance, leaving students with some positive remarks about the self-taught musician. Not many people were aware of his lack of professional training.

Sophomore London Richardson was amazed by his musical talent.

“He looked like he’s been playing for a while. He is pretty good,” said Richardson. “It’s amazing how he can play like that.”

Caroline Shelly, FMU’s Campus Activity Board president, said the platform for FMU’s Got Talent is very unique; this series of events allows people with many different passions to come together and pour their hearts out on stage.

“We have a wide range of contestants, some may have been performing their entire lives and for others this may be the first time they’ve been on stage,” Shelly said. “The FMU’s Got Talent series gives many students from different backgrounds the opportunity to be seen and heard in a new light on campus.”

The exposure of his natural talents landed him a slot at FMU’s annual Martin Luther King Jr. celebration. He recalled being approached after the last FMU’s Got Talent program by a woman asking him to be a part of the event. Bailey performed his rendition of “A Change is Gonna Come” by Sam Cooke.

Bailey gave advice to those who may be hesitant to step on a stage.

“If you don’t have a passion for it, then don’t do it,” Bailey said. “If you do, then do it to the fullest and never give into fear, because giving into fear only leads to regrets.”

Aside from his hobby of playing the piano, Bailey also enjoys making music with friends and is a part of the on-campus record label Miseducated Records. He also trains small groups of students in the on-campus gym.