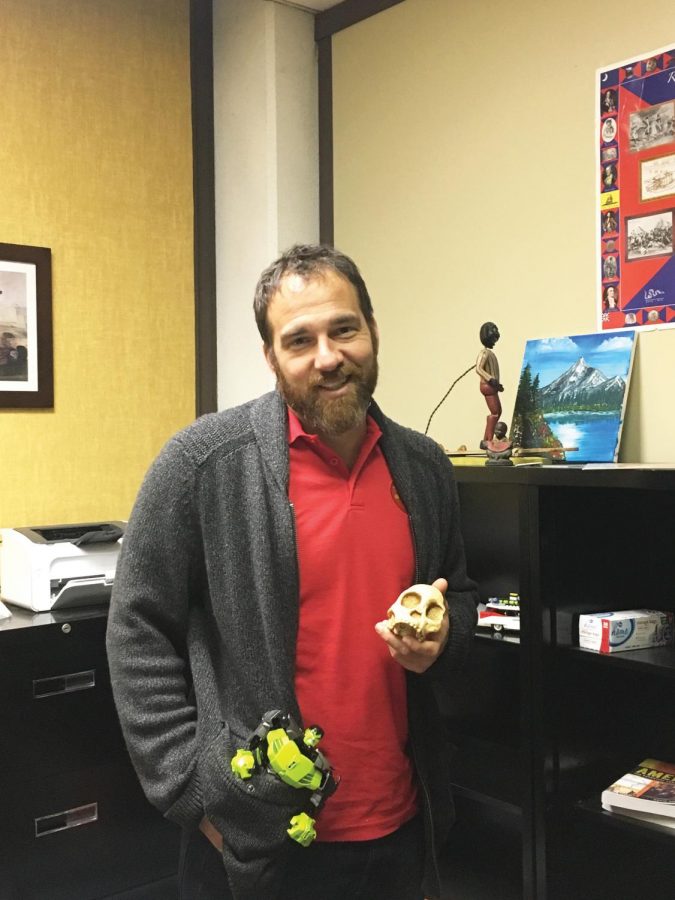 Assistant Professor of Archeology Christopher Barton poses with a skull and action figure.

When Barton approached FMU about the position, he was told about the big plans for advancements in the archaeology field research he would be expected to implement.

Barton said the choice to join the FMU faculty was an easy decision because of FMU’s sense of community and how that would contribute to its potential for an archaeology program to grow. He also said he liked FMU because of its size and strong community spirit.

According to Barton, the initial plan was to have a field research course that could be inclusive to students within the major and also students from all disciplines to learn not only about history but also about the social and cultural background that students are still being affected by today.

“When I came in for my interview, they told me about all of the plans they had for an archeology field class and that they had connections with Coastal Carolina University,” Barton said. “So I went home and did some research for potential places for a dig site in the area. That’s when I found Friend Field Village.”

Barton said the goal for starting a dig at Friend Field Village at Hobcaw Barony is to create a collaborative, interactive learning environment between the students.

“My area of expertise is in history and archaeology and their social and cultural connections,” Barton said. “But I am not originally from this area so that is where we create this combined effort to explore and understand Friend Field.”

Barton said his first full year at FMU has been very positive both professionally and personally.

“I feel like I am settling in well this year and I really like the student body and my fellow faculty members,” Barton said. “I think they are starting to like me as well so it has been a positive experience so far. I like that FMU is small enough that I can take the time to get to know students enough to help them in the way that they need.”

Barton also said he is grateful that he is able to use his own experiences to help students and let them know that it’s possible to overcome learning disabilities.

“I enjoy being able to take the time to share experiences that I had to overcome in undergrad,” Barton said. “I often tell students on the first day of class that I am dyslexic to encourage them to not only not be afraid to get tested, but more importantly, that you can overcome disabilities and do what you love.”

Barton said he has enjoyed his first year at FMU and looks forward to the years to come.