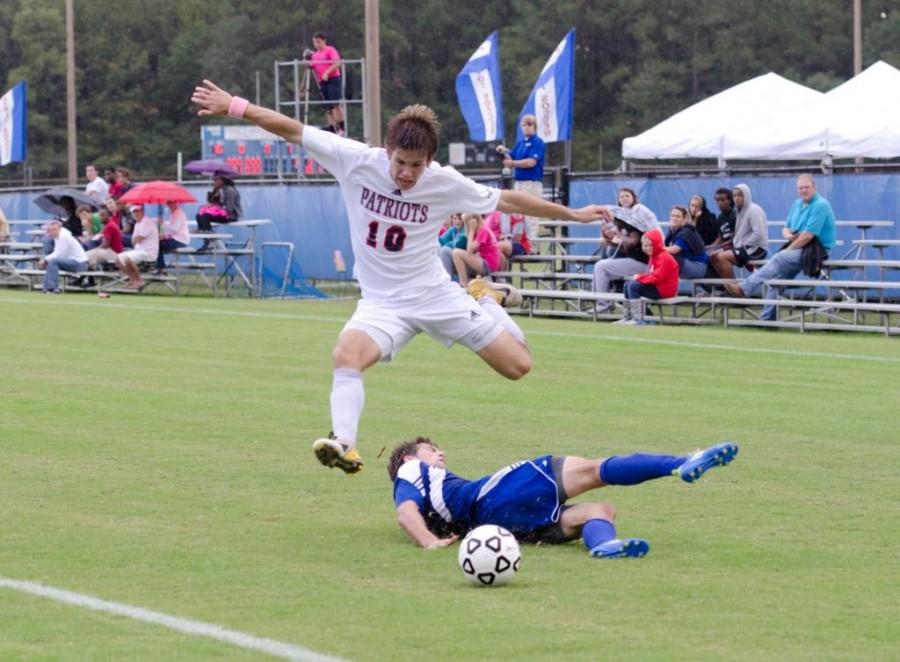 In the FMU versus Limestone College Saints game, the FMU men’s soccer team sported bright pink shirts with the words “Passionately Pink” written across the back during the pre-game warm ups to help ZTA in their campaign to raise breast cancer awareness.

After the warm up, the men changed into their uniforms to play the game against Limestone. The games started out with Limestone possession. Within the first 4 minutes however, the first yellow card was presented to Limestone’s starting mid-fielder Tom McCready for running into the FMU Goalie, Nick Lucido, a freshman majoring in political science.

From then it was a battle to be the first team to score, which turned out to be the Saints’ forward, Jack Bailey at the 38-minute mark.  That was the only goal made in the first half of the game.

The second half of the game started off with 2 more goals for the Saints. One made again by Bailey and the other by mid-fielder Daniel Mohsen.

At the 58-minute mark, FMU managed to put a goal of their own on the score board. The goal was made by sophomore biology major Alex Blandin who was assisted by sophomore computer science major Justin Walton.

With the score 3-1 in favor of Limestone, FMU raced to catch up. Many attempts were made, but none managed to sneak by Saints goalie, freshman Kyle Karagitz.

Nearing the end of the game, Mohsen kicked another goal for the Saints with 3 minutes left in the game.  The game ended with the win going to Limestone 4-1.

“Defensively we had trouble dealing with their attack,” said Lucido

Even though the game ended in a loss for FMU, the word about ZTA’s “Passionately Pink for the Cure” was out.

“We wanted people to come out to the game have a good time while we try to raise breast cancer awareness,” said Lauren Balutis, a junior majoring in early childhood education.

At half time, they had a yogurt-eating contest and held a small raffle where people won gift cards and bags of Starbuck’s coffee.

“Unfortunately, the weather did not want to cooperate with our endeavor,” said senior mass communication major Emily McNutt, who was commenting on the intermittent downpour of rain during the game.

The FMU men may have lost the game, but they managed to promote a cause.