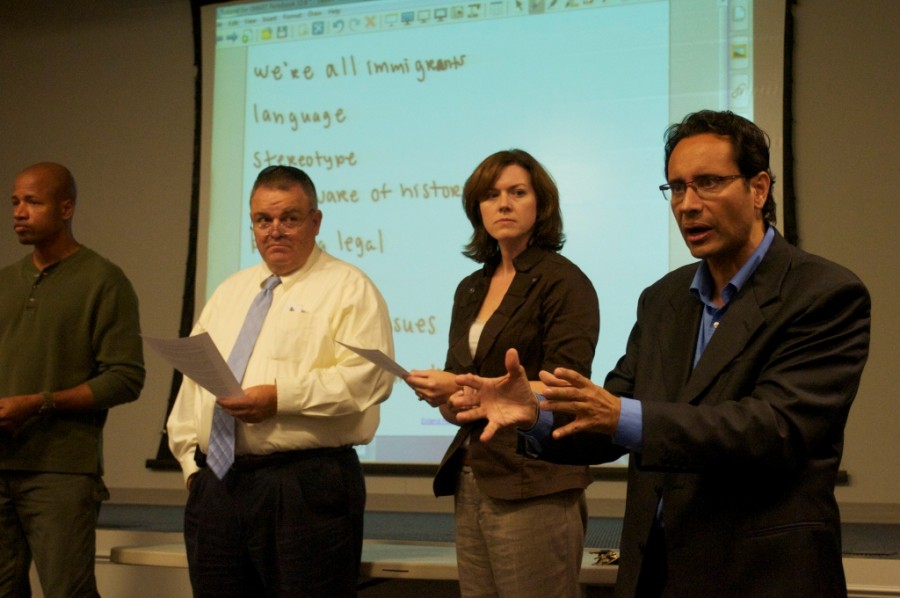 In an attempt to make the presentation less of a lecture and more of a conversation, Nebot asked the audience for questions or comments about immigration. One audience member reiterated statements that Nebot had made at the start of his talk, stating that we are all immigrants. Another audience member said that they were curious about why people came to the U.S. illegally to begin with.

Nebot began answering the audience’s questions by telling them that being an immigrant did not necessarily mean that you have come from another country; it could refer to a situation in which you felt different from everyone else there. According to that definition, Nebot said, everyone has been an immigrant at one time or another in their lives.

Immigration is not anything new to the United States. The country was started by immigrants and historically, America has almost always welcomed new immigrants. At one point though, Nebot said, immigration became a sticky point and some Americans began to be resentful of the immigrants. Nebot said that the resentment began after World War I. American men had gone off to fight in the war and returned to find that their jobs had been taken by immigrant workers. This created tension when the soldiers returned and they no longer had jobs. Nebot said that this happened again after World War II.

Economic situations in most other countries in the world are far worse than in the U.S., and Nebot encouraged the audience to consider how hard it is for immigrants to leave all their family behind to start a new life in America. He said that most people did not have many options in their own country and they were desperate to find a way to provide for their families so they enter the country illegally. Nebot said that he thinks the term “illegal alien” has a negative connotation and he encouraged the use of “economic refugee” in its place because it better describes the reasons why the immigrant entered the country to begin with.

Juan Cruz, a business administration masters student at Francis Marion, said that Nebot’s presentation introduced immigration from another view point than what he had traditionally heard.

Maria Garcia Otero, Assistant Professor of Spanish, also attended the event. She said that events like the Hispanic Heritage event are important for students but teachers can also learn new things at them.

“I always encourage these types of events for students, not only because they are educational but also because they provide new perspectives,” Otero said. “I always try to come up with an appropriate term because I am against [using] ‘illegal alien.’ I think ‘economic refugee’ makes so much sense and I like it.”

At the end of his presentation, Nebot offered some solutions for dealing with the issues of illegal immigration. He was optimistic that there were solutions that would ease the tensions of and perhaps also help decrease the number of people coming into the United States illegally.